A Netherlands production of The Passion was attended by thousands in the northern city of Groningen earlier this year to see Dutch actors taking on the roles of Jesus, his disciples and others in the Easter story. Staged at the vismarkt in the heart of the town, the production began with a 6m long white neon cross carried from the Groningen FC soccer stadium all the way to the square.

Handling the lighting for the project was PRG EML Productions in Utrecht. Under direction of production manager Martijn Roosen, W-DMX was used to create a wireless link between the vismarkt stage and Martini Tower, a church nearly 700m away. The network distribution was based on Art-Net with nodes and switches from ELCLighting.

Martijn said: “ELC Lighting is always my first port of call on any job. I have been using ELC products for over seven years now – in fact we use them as the backbone of any project’s infrastructure. This particular application saw lighting designer Bas van der Poel of Light Image use the ELC network to control a variety of luminaires, including Ireos 7kW by SpaceCannon, VariLite washes and spots, Clay Paky Sharpys and GLP Impression 120RZ fixtures.”

Martijn continued: “On every job, we use a single node to test fixtures on a series of nodes and switches to distribute data and test fixtures. ELC nodes and switches when combined with an access point and fixture tester for iPhone and iPad make for a powerful combination during load-ins. During shows we rely on ELC products to distribute data, monitor data, merge dmx lines and take over fixtures with errors to reset them.

Martijn concluded: “PRG has an excellent relationship with ELC Lighting and have been alpha and beta testing their software since the first build of dmXLAN v4. ELC’s products and expertise were invaluable in helping us deliver The Passion successfully. In fact they are essential on every job we do.” 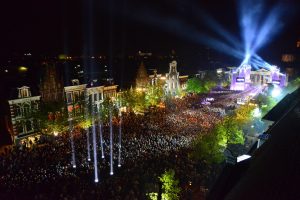